With this week’s release of Reckoning by Veronica Wolff, the fifth and final book in THE WATCHERS series, we thought we’d take a look back at all the books — and one e-novella — that make up this spectacular and easily readable series, starting from the very beginning.

Is life offering fewer and fewer options? Then join the dead. When Annelise meets dark and seductive Ronan, he promises her a new life-if she has the courage to chance the unknown. Now, she’s whisked away to a mysterious island and pitted against other female recruits to become a Watcher-girls who are partnered with vampires and assist them in their missions. To survive and become a Watcher, Annelise has to beat out every other girl, but she’s determined to do so, because to fail doesn’t mean dishonor-it means death.

What we loved about it: Vampires, boot camp, and some Hunger Games-esque violence combine to create a thrilling, fast-paced paranormal adventure. 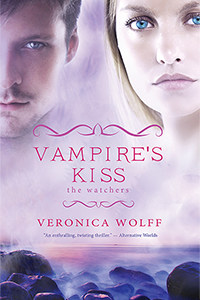 As someone who has survived her first year as an Acari recruit, Drew’s ultimate goal is to become a Watcher and be paired up with a Vampire agent. Except nothing is as it seems. The vampire Alcántara is as sinister as he is sexy, Ronan is more distant than ever, and it turns out there are other vampires out there. Bad ones. They’ve captured one of the Watcher vamps and are torturing him for information-and Drew is going undercover to rescue him.But when their vampire prisoner turns out to be a gorgeous bad boy, Drew’s first mission quickly turns into more than she bargained for…

What we loved about it: Vampires, romance, action … it’s all there and more in Vampire’s Kiss, and as with the first book, I’m once again left wanting more. Not because the book was lacking — far from it, actually — but because I just need to know what happens next!

The world Wolff created in Isle of Night flourishes in Vampire’s Kiss as she expands on the mystery of these island vampires and the purpose of Drew and the other Acari.

It’s the start of the fall semester, and a new crop of Acari and Trainees have descended on the Isle of Night. Watcher training has intensified, and Drew has a new roommate named Mei-Ling. But Mei-Ling harbors a dangerous secret that drove the vampires to abduct her against her will. Drew knows she shouldn’t get involved, but she can’t seem to leave her roommate to fend for herself.

Luckily, Drew has other things on her mind—like vampire Carden. A blood bond to a brawny, eighteenth-century Scottish bad boy tends to preoccupy a girl. And though she’s still figuring out what this bond means, one thing has become clear: She craves him in a major way.

But then bodies start turning up on the island. All the evidence points to the existence of a rogue vampire, and the sinister vampire Alcántara is gunning for Carden, even though Drew has proof that Carden had nothing to do with the murders. Now she has to find the true killer—without endangering Carden, Mei-Ling, or herself…

What we loved about it: All the drama, action, and romance of Veronica Wolff’s The Watchers series returns in its third — and quite possibly, best installment yet, Blood Fever. 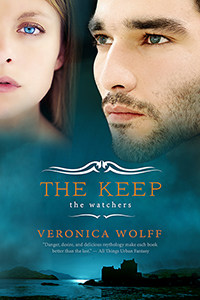 JUST BECAUSE YOU WORK FOR THE DEAD DOESN’T MEAN YOU WANT TO JOIN THEM.

Drew has just started her second year on the Isle of Night, and the weather isn’t the only thing changing drastically. She has ascended to the rank of Initiate. She’s also found an intimate love in the handsome vampire, Carden. But most of all, she no longer dreams of escape. She dreams of vengeance.

Her friend, Emma, was brutally wounded by the savage vampire Alcántara, and may have been taken to the dreaded castle, from which none of the living return. But there are so many different stories from so many people with so many of their own deceits and machinations, Drew can’t be sure of anything—except that she must find a way into the castle to discover the truth and take down Alcántara once and for all.

But Drew isn’t the only one out for revenge. Someone very dangerous on the island is also out for blood…

What we loved about it: I just love how deliciously Wolff blends her vampire mythology with action, romance, and mystery. It’s like Nancy Drew on crack, as Drew tries to solve the mystery of her friend’s supposed death … but then you toss in some hot and steamy romance with her vampire love Carden, and some sexual tension of the nth degree with Tracer Ronan. 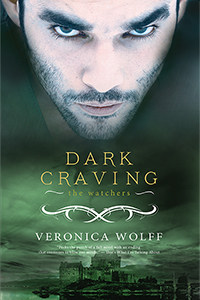 NOW IT’S TIME TO HEAR RONAN’S SIDE OF THE STORY.

Tracer Ronan has cared for only one person in his life: Charlotte, his sister. With her death, a consuming desire for revenge and destruction ignited in his heart. But when new recruit Annelise Drew arrives on the island, Ronan finds he craves more than revenge. She is a threat to his mission, his sanity, and his heart. Now Ronan will need every ounce of will and strength to avenge his sister and prove where his true allegiance lies.

Tracer Ronan shares his secrets with no one. But will he survive his darkest cravings?

IN THE GAME OF EVIL, THERE IS ALWAYS A FINAL RECKONING

Annelise’s slaying of Vampire Dagursson has thrown the Isle of Night – and her own heart – into chaos. Though she shares a bond with the vampire Carden, her connection to Ronan grows deeper as he protects her from those who seek justice for and power from Dagursson’s death.

But there’s one thing Ronan can’t protect her from – his sister, Charlotte, who is alive and sworn to destroy Annelise and everyone she holds dear. Now Annelise must decide who she trusts as she embarks on a suicide mission to rescue the most important woman she’s never met: her mother.

Trapped in a deadly game against an ancient evil, not everyone will be left standing as Annelise faces the final reckoning.

What we loved about it: Reckoning is packed with action, intrigue, and sizzling romance. It is a worthwhile conclusion to a sexy and seductive series […] Wolff delivers brilliantly on this tantalizing franchise, and serves her characters well with a thoughtful and emotionally powerful, action-packed finale.

Want even more goodies? Check out some of our features from when THE WATCHERS series was featured as our Book of the Month!

Now we’re giving away a prize of YOUR CHOICE! That’s right, you get to choose any one of Veronica’s books — she’s written more than just the WATCHERS series,  you know — and we’re doing a giveaway every day this week! So you have more chances to win each day!

Also: this contest is open INTERNATIONALLY!

View all of Veronica’s books HERE, and then fill out the Rafflecopter form below, be sure to telling us which book — and which format (ebook or print copy) you’d like to receive!

PLEASE NOTE: Print copies are ONLY available for U.S. contestants. If you live outside the U.S., you are welcome to participate, but we can ONLY send you an e-book.

Contest will run every day this week, with more opportunities to win by checking out EACH DAY’s post and looking for the DAILY KEY WORD. Contest runs through midnight (PT) on Monday, April 11th.

One thought on “Reckoning by Veronica Wolff: The Watchers Series Recap”