Today, we’ve got part 2 our exclusive Q&A with A Thousand Pieces of You author Claudia Gray. Thanks for taking the to chat with us, Claudia. Readers – if you missed it, check out part 1 here. We’ll have part 3 on Friday. 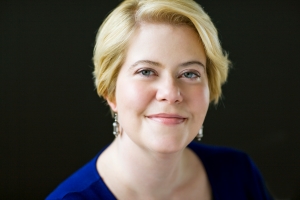 The different worlds Marguerite visits are all based on the concept of “what if.” What are some of the “what ifs” you considered but ultimately did not use in ATPOY?

I’m hesitant to share too many, because I might still use them! But one alternate world was deleted — a dystopian, totalitarian state where Marguerite worked in a factory, Theo was an imprisoned rebel and Paul was one of the elite state guards. That made it all the way to the draft of the novel I turned into my editor, and I loved a lot of things about how that world worked, but in the end it was too grim to fall where it did in the story, and moving it never quite worked. Now I doubt I’ll have time to get back there again. Maybe I’ll revisit it in some stories on Wattpad …

What sort of research went into each of the different realities Marguerite visits?

Varying degrees. I looked up some locations in London, talked with my friend Marina the Russian oceanographer about Russia and oceans, and spent a lot of time working with the world clock. (The Firebird allows you to travel through dimensions, but not through time, so if Marguerite leaps out of, say, Madrid — into, say, Beijing — she’ll appear at the time of day in Beijing that aligns with the time of day in Madrid when she left. Does this make sense? I won’t blame you if it doesn’t, because honestly it confused me so much.)

Ironically, the dimension I had to do the most research for was “ours,” the world Marguerite leaves from. In any other world, if some details didn’t align with reality, I could always say, well, that’s how it is in that universe. Not as much leeway here at home! Marguerite’s family lives in the Bay Area of California, so I arranged a house swap with someone who lives in Oakland. That gave me a chance to see the neighborhoods Marguerite would live in and visit most often, to check out a few of the most important real-life locations, and generally soak up local color.

There are definite positives and negatives to the alternate realities that Marguerite visits. What is one of the positive things you wish would make it into our world?

I wouldn’t mind some of the holographic technology from the futuristic world. And how about those personal-defense bracelets? Cute, practical and deadly: Just how I like my accessories.

And one last question: Paul. Can I have him? Like, can I just keep him?

Some versions of Paul are unavailable — but since everything that can happen does happen, in some dimension out there, you’re in luck. 😀

I’ll take him! Thanks, Claudia.

One response to “Claudia Gray: A Thousand Pieces of You Q&A Part 2”