Following up the edgy, action-packed Darkness Becomes Her, Kelly Keaton has done it again with her newest YA thrill-ride, A Beautiful Evil. Once again Keaton proves her finesse for blending genres and creating something wholly unique. 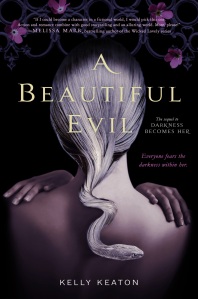 A Beautiful Evil takes place following the events of Darkness Becomes Her, with Ari facing all the consequences that come along with that:

A power she can’t deny. A destiny she’s determined to fight.

When Ari first arrived in the dilapidated city of New 2, all she wanted was to figure out who she was. But what she discovered was beyond her worst nightmare. Ari can already sense the evil growing inside her—a power the goddess Athena will stop at nothing to possess.

Desperate to hold on to her humanity and protect her loved ones, Ari must fight back. But Athena’s playing mind games, not just with Ari but with those she cares about most. And Athena has a very special plan for the brooding and sexy Sebastian.

Ari is determined to defeat Athena, but time is running out. With no other options, Ari must unleash the very thing she’s afraid of: herself.

As you’d expect in a middle book, a lot of the emotions and relationships of the characters are in limbo — but the plot never suffers. Keaton deftly progresses Ari’s story, and her quest to defeat Athena with all the genre-bending expertise we saw in Darkness Becomes Her, and with plenty of action and tension to keep readers on the edge of their seats.

As in the first book, A Beautiful Evil also includes a bit of a love letter to the city of New Orleans. Though the “New 2” of Keaton’s books is a far cry from the Crescent City of today, Keaton still manages to create vivid imagery of a city that has long fascinated our imaginations. Her descriptive prose is also keenly at work when Ari ventures beyond New 2 (and yes, I’m being vague on purpose — no spoilers here!)

Questions about characters and relationships left hanging at the end of Darkness Becomes Her are also addressed — though not fully resolved, since book three still remains. But if you’re wondering about Ari’s father, Sebastion, Violet, and the others, have no fear. They all get their time to shine in A Beautiful Evil.

With another thrilling blend of romance, supernatural, dystopian, and Greek mythology, A Beautiful Evil is a worthy follow up to Darkness Becomes Her and will have readers eager for more. New 2, here I come!

A Beautiful Evil in stores next Tuesday.

One thought on “Book Review: A Beautiful Evil by Kelly Keaton”