Sweetly by Jackson Pearce may have only been out for about a week now, but as fans of Jackson’s work, we’re always eager to hear what she’s working on next! So here’s a look at a couple of her upcoming books!

Fathomless is another companion to Sisters Red and Sweetly, and continues the concept of adapted/modernized fairy tales. In this case, Fathomless is a twist on The Little Mermaid. When we interview Jackson last week, she had this to say:

I really love the story. I’ve tried to incorporate the original fairytale as much as possible, while also paying homage to the more well known versions of The Little Mermaid. Though there are no talking crustaceans. I’m sorry. 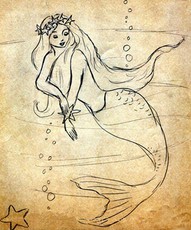 Fathomless is described by Little Brown as such:

Here is the synopsis from Jackson’s blog:

Celia Reynolds is the youngest in a set of triplets, and the one with the least valuable power. Anne can see the future, Jane can see the present—therefore essentially read minds—and all Celia can do is see the past.

Lo doesn’t know who she is. Or who she was. Once a human, she is now almost entirely a creature of the sea—an undine, a nymph, a mermaid; all terms too pretty for the soulless creature she knows she’s becoming. The other ocean girls, her “sisters,” tell her there’s only one way for her to earn her soul and humanity back—convince a mortal to love her, and steal his.

Lo thinks a soul is within her grasp when she saves a guitarist, Jude, from drowning. When Celia intervenes, she accidentally reads Lo’s past, calling out Lo’s long-forgotten human name. The two forge a friendship, meeting by the shore to remember Lo’s old life, to talk, to share secrets they’d never tell their “real” sisters.

Yet remembering makes Lo more desperate than ever for a soul– and despite Jude’s blossoming romance with Celia, she can’t resist longing for his. Straddling the line between humanity and darkness, Lo struggles to find her place on either side, while Celia wonders just what she and her power have unleashed. But the sister you choose can be more powerful than those you’re born with– in a fight against Lo’s sisters and the waves themselves, Jude and Celia risk their lives to save Lo from her own darkness. But is a soulless, wanting existence better than none at all?

This is a new, standalone book from Jackson:

A contemporary novel about love, loss, God, and sex (but not necessarily in that order), coming April 2012!

When we asked her about Purity last week, Jackson had this to say:

I got the idea for PURITY while driving back from a winterguard competition several years ago. At the time, I thought it would be a cute, light story about a girl losing her virginity. But when I started writing it, I realized it had to be a much deeper book than that, about God, love, and loss. It’s a very different book, but I love it so much; I’m incredibly excited for people to read it.

And here is the official synopsis:

Hours before her mother died, Shelby promised her three things– to listen to her father, to live life without restraint, and to love whenever possible.

Those promises were easy to keep when she was younger, but things get tricky when she turns sixteen. Shelby’s still-grieving father joins a committee at their church to host a Purity Ball– a dance where young women pledge their purity (namely, their virginity) to their father’s safekeeping until they marry.

But Shelby has a Life List– things she wants to do, to live without restraint like she promised her mother– and getting married young isn’t on it. Waiting until she’s thirty to have her first time isn’t on it either. But how is she supposed to keep her promise to listen to her father if she refuses to pledge? By exploiting a loophole- by losing her virginity before the Ball.

She and her best friend Jonas make a list of potential partners, but somewhere in-between failed attempts at losing her virginity, trying to answer some lingering questions about God, and planning the Ball with her Dad, Shelby starts to understand what her mother really meant, what her father really needs, and who really has the right to her PURITY.

For the comments: Which of Jackson’s new books are you most excited about? Will you be reading one or both of them?

2 thoughts on “What’s next for Sweetly author Jackson Pearce …”