Adios, Nirvana by Conrad Wesselhoeft is one of those books that feels like a moment pulled out of time. It is ripe with pop culture references, set in a real-life breathing city and filled with characters who could be your best friends, your cousins, your neighbors, your siblings. Every part of it feels steeped in reality. It’s one of those books men can read to feel nostalgic about their youth; that teen guys can read to relate to in the present; and that girls and women can read to better understand their husbands, boyfriends, brothers, fathers, etc. 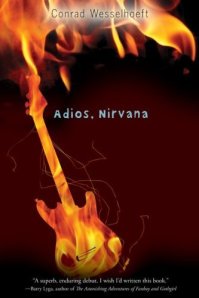 Adios, Nirvana tells the story of high school junior Jonathan — who’s on the cusp of flunking out of school. He didn’t always struggle with school. In fact, his principal is still beaming over the accolades he received for being named last year’s Best Young Poet. But since then, Jonathan’s twin brother Telly was killed — and Jonathan hasn’t been the same since, and neither has his poetry or his music (both he & his brother were jamming guitar players). But Jonathan’s friends aren’t about to let him throw his life away — and neither is his mom or his teachers. So it’s with some reluctance that Jonathan ends up listening to a dying World War II veteran tell his story — and by writing down this man’s story, Jonathan will be able to scrape by and move onto his senior year of high school.

Wesselhoeft writes in such a way that his book comes to life. It doesn’t feel like fiction; it feels like something real. Like something I could reach out and touch. Jonathan feels like a real person; not a character. I can relate to him. I understand him. I could know him. And his friends, too. Every one of them is painted so vividly — without feeling cartoonish. They drink Red Bulls to stay awake. They jam loudly on guitars late into the night. They concoct insane plans involving a priceless guitar and a giant Velcro King Kong statue. They are teenage guys. We all know them. We either were them or we went to school with them. If you’re in high school now, they are your classmates. If you’re older, they shaped your past.

Likewise, Wesselhoeft’s descriptions of Seattle transport you there. I could picture myself in the grimy city snow; waiting for the bus; crossing the floating bridge. I could see myself walking along the hilly streets right alongside Jonathan. And I must confess, I’ve long had a bit of a thing for Seattle’s music scene. Yes, Seattle, the birth place of Grunge Rock. Of Nirvana and Pearl Jam. So to see this side of the city’s history come to life was exciting; it meant something to me.

And while Wesselhoeft’s story is steeped in the present day, the past is an equally important part of the story — just as it’s an equally important part of life, in general. For it’s through listening to David tell his stories from World War II that Jonathan finally comes to understand himself; that he comes to terms with his brother’s death. And somewhere along the way, he finds his voice, too.