We are really thrilled today to present part 1 of our two-part, exclusive interview with Hush, Hush and Crescendo author Becca Fitzpatrick. Becca has been INCREDIBLY busy over the last several weeks, and so we are beyond grateful to her for still agreeing to answer all our questions. An extra special big thanks to Becca (and to the folks at S&S who gently reminded her not to forget about us)! And now, the interview:

Why fallen angels and why now? 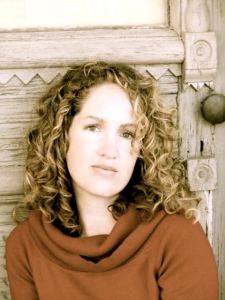 I started writing HUSH, HUSH in 2003, and contrary to how it may appear, the book—and the idea of fallen angels—wasn’t an overnight success. I spent five years trying to get the book published. I’ve heard many times that fallen angels are the new vampire, but I don’t believe anything will replace the vampire. Angels and vampires are two separate beings with vastly different mythologies. It’s definitely fun to see all the buzz about angels, and I hope my readers enjoy the world and characters I’ve created.

Nora and Patch seem to have some real communication problems, especially in Crescendo. Why is that?

Oh, gosh, there are lots of reasons. Why do normal people have communication problems? Pride? Frustration at not being heard? Fear? Most of Patch’s refusal to communicate with Nora stems from the fact that he can’t, and still be under the good graces of the archangels. He’s doing a careful juggling act in CRESCENDO, trying to keep two opposing parties happy—something not easily done. Nora, on the other hand, is struggling with her own fear and jealousy. And insecurity. She wants to communicate her feelings to Patch, but she isn’t sure she can trust him. I think most people can relate to being in that position.

I love the imagery in the scenes at the amusement park (in both books), especially the big climax in Crescendo. Tell us about the origins of this particular setting. (One too many viewings of The Lost Boys? Or something else?) And does such a place really exist?

Laughing! I’ve never watched The Lost Boys. I’m guessing there’s a pretty memorable amusement park scene? I think I’ve used the setting of Delphic Amusement Park so much in my books because there’s something inherently creepy about the tinkling music, rickety old rides and funhouses. It creates the perfect atmosphere for something to go wrong…terribly wrong.

* Yes, most of “The Lost Boys” takes place at an amusement park. Very creepy!

Vee is supposedly Nora’s best friend, but it doesn’t always seem as if she really has Nora’s best interests at heart. Is Vee someone we should watch out for in the third book? Or is she just still maturing and learning how to be a good friend?

I based Vee’s character on a couple of my childhood friends. These girls were loud, obnoxious and incredibly fun. They got me to do these I never would have done otherwise (in both a good and bad way). As I look back on the kind of friend I was in high school, and on my own friends, I know none of us were perfect. Did we always make the best choices? No. Did we always put our friendship above all? No. Did we try our best to be loyal and have a lot of fun along the way? Yes. I think the relationship between Nora and Vee is very genuine, although not always ideal. Should you watch out for Vee in the third book? Let’s just say you should never rule out anyone…

Nora is particularly ambivalent in Crescendo. Is all the reality-bending messing with her head? Will we find out more about this in the third book?

I think Nora is a very real sixteen-year-old girl, dealing with first love and first betrayal. We know from HUSH, HUSH that she has a hard time trusting others, and it’s only made worse by the fact that her father was murdered and the crime was never solved. And, yes, she’s also dealing with rather evil creatures toying with her mind. By the third book, Nora has developed some resistance to all of this, and really grows into a much stronger, more decisive character. She’s learned quite a bit about herself, and those around her, and to bring the villain to his knees, she will have to be a couple steps ahead.

Tune in tomorrow for part 2 — and on Friday, we have video of Becca answering our flash questions!