Today, we have a new story from our Literary Lovers Mash-Up Writing Contest entries. We asked you to write about two literary lovers meeting OR falling in love for the first time in about 500 words. 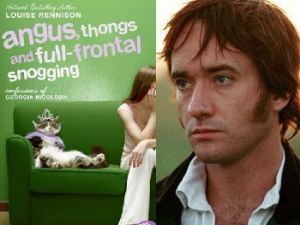 Today’s entry is once again from Lillie Hill. This time, she’s mixing it up — introducing a modern character to a classic. Her mash-up features Georgia Nicolson from the Confessions of Georgia Nicolson series by Louise Rennison and Mr. Darcy from Pride & Prejudice.

“Georgia.” The voice came from behind me, sharp and staccato. I straightened up immediately, forgetting that I was hunched beneath a bookshelf.

“Ow.” I rubbed my head, where it had made contact with the unforgiving wood. I was trying to re-shelve some books. Truthfully, I was no good at the Dewey Decimal system.

“Georgia.” The voice came again, more insistent this time. It was my supervisor, Beatrice Tanner. She didn’t sound happy.

“All right. I’m coming.” I spun around, and walked to the check-out desk that Beatrice was manning.

“This gentleman would like to check out a few novels.” Beatrice flapped her arms in the general direction of the computer we used to scan out materials. She didn’t really know how to use it. I checked him out, as I walked over. He was tall and slender, and had a stern face. He stared at me, a piercing expression in his eyes. He was a total hottie. Maybe a little too serious. And maybe a little too old. But, maybe not.

I tossed my head, trying for nonchalance. I wanted my fringe to cover the portion of my right eyebrow that was missing. (An unfortunate waxing incident.) But instead, I stumbled and turned my ankle just enough to put me off balance. Wildly, I grasped for purchase, my hand landing on a stack of books that lay on the counter. It wasn’t enough to stop my downward movement, and I landed hard on my bottom, two books following me down and clonking me on the head.

“Oh dear.” I heard Beatrice say, but she made no move to help me up. She was frozen, one hand at her throat. Her face held a touch of amusement.

“Do you require assistance?” The man held his position, except to lean forward slightly over the counter. He clasped his hands behind his back, and raised an imperial eyebrow. My face was so hot, my blush probably rivaled Rudolph’s nose.

“I’m fine,” I mumbled, popping up from the floor. I busied myself with the process of checking out his books. I was utterly embarrassed. I avoided eye contact until I felt a touch on my sleeve.

“Perhaps you could take a break now. I will treat you to tea.” The statements were said with certainty, no hint of a question. I nodded, for the first time noticing that Beatrice had disappeared.

I rounded the corner of the counter, putting the two of us in kissing distance. He stepped back instantly. I swallowed a hint of disappointment. He offered me his arm, then placed his hand atop mine, giving it a slight squeeze. My mouth parted in a wide grin.

“Oh!” I said, realizing I had forgotten a vital piece of information. “I don’t know your name.”

See all of the Literary Lovers Mash-Up entries.