Today, I am so thrilled & so honored to be part of the official blog tour for The Third Twin by C.J. Omololu.

You may have heard CJ’s story. She’s an amazing author with amazing friends who are supporting her as she battles Stage 4 colon cancer that has spread to her brain, hips, spinal cord, and several organs. Until recently we weren’t sure if CJ would make it to the release date of The Third Twin, but with the help of some modern medicine, and a whole lot of good thoughts and prayers – it looks like things are good to go for the big day.

That’s why I’m so pleased today to be able to do just a small part to help support this book and the amazing, strong woman who wrote it. Cancer sucks. CJ ROCKS!

Be sure to check out our review, then keep reading for your chance to win one of several AMAZING prize packs!!!

An edge of your seat thriller awaits readers within the pages of The Third Twin by C.J. Omololu, which follows sisters Lexi and Ava, as they face the terrifying consequences of a childhood prank taken too far. As kids, they blamed a fake “third twin” – Alicia – for any trouble they got into. As teens, they use “Alicia” to date boys they’re not serious about. But when one of those boys turns up dead, the sisters begin to suspect each other … or wonder whether “Alicia” is actually real.

Omololu builds a realistic mystery, that is gripping and engaging. Readers will race through the pages, as eager as Lexi is to solve the puzzle of “Alicia” and the murder. And though she places clues throughout the book, the ultimate twist is a good one and not easy to guess (I didn’t). Readers will have their suspicions, but it’s not until all is finally revealed that the full picture becomes clear.

Suspense and intrigue keep the pages turning, but it’s the relationship between the sisters that gives the story heart. An engaging and thoughtful read, The Third Twin is in stores February 24th.

PRE-ORDER a SIGNED copy of THE THIRD TWIN from A Great Good Place for Books
By calling: (510) 339-8210 or e-mailing them at: books@ggpbooks.com

When they were little, Lexi and her identical twin, Ava, made up a third sister, Alicia. If something broke? Alicia did it. Cookies got eaten? Alicia’s guilty. Alicia was always to blame for everything. The game is all grown up now that the girls are seniors. They use Alicia as their cover to go out with boys who are hot but not exactly dating material. Boys they’d never, ever be with in real life.

Now one of the guys Alicia went out with has turned up dead, and Lexi wants to stop the game for good. As coincidences start piling up, Ava insists that if they follow the rules for being Alicia, everything will be fine. But when another boy is killed, the DNA evidence and surveillance photos point to only one suspect: Alicia. The girl who doesn’t exist. As she runs from the cops, Lexi has to find the truth before another boy is murdered. Because either Ava is a killer…or Alicia is real. 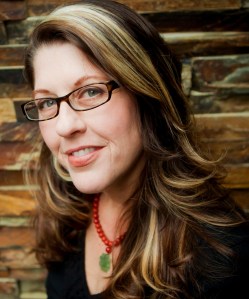 CJ OMOLOLU is the author of the ALA-YALSA Quick Pick Dirty Little Secrets and several other YA novels. She loved to read but never thought to write until she discovered that the voices in her head often have interesting things to say. She lives in the San Francisco Bay Area with her husband and their two sons. Visit her online at www.cjomololu.com and follow her on Twitter @cjomololu.

Must be 13 + To Enter. Shipping restrictions are listed after each prize in the form, All open to US, some open INTL. | One entry per person, per household.

Fill out the Rafflecopter form HERE to enter.