A fresh new science fiction twist, heart-pounding action, and a romance so powerful it endures across multiple dimensions — that’s the core of A Thousand Pieces of You, the first book in Claudia Gray’s spellbinding new Firebird Saga. 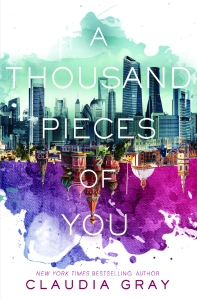 Marguerite Caine’s physicist parents are known for their radical scientific achievements. Their most astonishing invention: the Firebird, which allows users to jump into parallel universes, some vastly altered from our own. But when Marguerite’s father is murdered, the killer—her parent’s handsome and enigmatic assistant Paul—escapes into another dimension before the law can touch him.

Marguerite can’t let the man who destroyed her family go free, and she races after Paul through different universes, where their lives entangle in increasingly familiar ways. With each encounter she begins to question Paul’s guilt—and her own heart. Soon she discovers the truth behind her father’s death is more sinister than she ever could have imagined.

A Thousand Pieces of You explores a reality where we witness the countless other lives we might lead in an amazingly intricate multiverse, and ask whether, amid infinite possibilities, one love can endure.

In some ways, A Thousand Pieces of You feels like several books in one — that’s how fully-realized each alternate universe is that Marguerite visits. The action starts off right away, and keeps up at a thrilling pace throughout the entire book. But it’s the tantalizing mystery of the Firebird technology, and what’s really going on across the multi-verse that keeps you hooked.

Gray has crafted a truly brilliant story on every level. She has wonderful, enchanting characters. A thrilling and fast-paced plot. A smart science fiction angle. Romantic tension to die for. And a mystery that’s just bursting through at every turn. A Thousand Pieces of You is the complete package.

And while all of these elements really shine, I feel like the romance deserves a little extra attention — because it is so noteworthy and all-encompassing. Because this isn’t just the love between two characters; it’s the love between two characters and every version of themselves across infinite alternate universes. It’s an insanely romantic notion, and Gray employs it perfectly in A Thousand Pieces of You. There is love and loss and love again, and it’s heartbreaking and swoon-worthy all in one. I ached with the romance and the tension between her characters.

A Thousand Pieces of You is in stores now.