Today is the release day for I’ll Give You the Sun by Jandy Nelson — and we’re celebrating with our book birthday stop on the official blog tour! Plus, be sure to scroll down for more goodies & a chance to win a copy of Jandy’s first book, The Sky is Everywhere.

The theme of today’s post is a BOOK BIRTHDAY! So to celebrate, we whipped up some I’ll Give You the Sun-themed CUPCAKES! But first, here’s more about the book:

Jude and her twin brother, Noah, are incredibly close. At thirteen, isolated Noah draws constantly and is falling in love with the charismatic boy next door, while daredevil Jude cliff-dives and wears red-red lipstick and does the talking for both of them. But three years later, Jude and Noah are barely speaking. Something has happened to wreck the twins in different and dramatic ways . . . until Jude meets a cocky, broken, beautiful boy, as well as someone else—an even more unpredictable new force in her life. The early years are Noah’s story to tell. The later years are Jude’s. What the twins don’t realize is that they each have only half the story, and if they could just find their way back to one another, they’d have a chance to remake their world.

This radiant novel from the acclaimed, award-winning author of The Sky Is Everywhere will leave you breathless and teary and laughing—often all at once.

For this occasion, I put my own spin to the ever-popular and always-delicious “sprinkle cupcakes.” I thought the colorful cupcake was a perfect combination with the bright cover for I’ll Give You the Sun.

I started with my favorite white cake recipe from the good ol’ Better Homes & Gardens Cookbook — then mixed multi-colored sprinkles into my batter. (You can also use a boxed cake mix, too … some even come with the sprinkles already mixed in). Once mixed, I poured the batter into paper cupcake liners and baked according to the recipe’s instructions.

Once out of the oven, it’s time to let the cupcakes cool … frosting warm cupcakes is a big no-no. Once cooled completely, I pulled out a tub of my favorite vanilla frosting (yes, here’s where I cheat … I hate making frosting from scratch, and I think the store-bought kind is just fine). 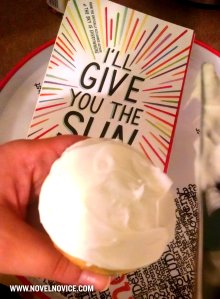 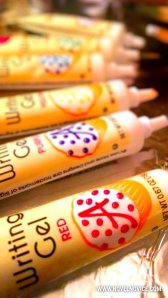 Once my cupcakes were frosted in white, I arranged them on a circular tray — and then began adding colorful “rays” using the gel frosting, mimicking the artwork on the cover of I’ll Give You the Sun.

Now, I also like my sprinkle cupcakes with extra sprinkles on top — so I went ahead and scattered some more on top of the frosted cupcakes. Adds just a nice little extra dash of “sunshine,” no? 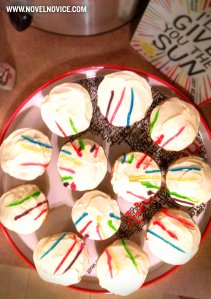 And the final step: curl up with your copy of I’ll Give You the Sun (in stores today) and EAT CUPCAKES while you read!!! 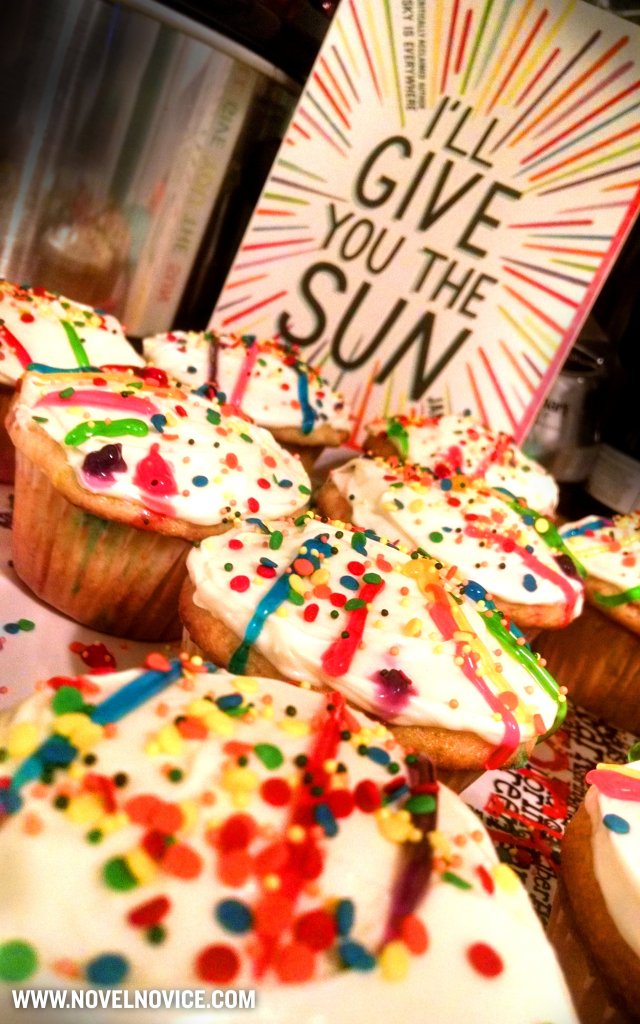 Jandy Nelson, like her characters in I’ll Give You the Sun, comes from a superstitious lot. She was tutored from a young age in the art of the four-leaf clover hunt; she knocks wood, throws salt, and carries charms in her pockets. Her debut novel, The Sky Is Everywhere, was on multiple Best Books of the Year lists, was a YALSA Best Fiction for Young Adults pick, earned numerous starred reviews, has been translated widely, and continues to enjoy great international success. Currently a full-time writer, Jandy lives and writes in San Francisco, California—not far from the settings of The Sky Is Everywhere and I’ll Give You the Sun. Visit her online at www.jandynelson.com or find her on twitter at @jandynelson.

Got a question for Jandy? @PenguinTeen is hosting a Twitter chat with Jandy Nelson, Stephanie Perkins, and Gayle Forman, tonight, Sept. 16th, at 7:00 PM ET!

I’ll Give You the Sun is on shelves now! Signed / personalized copies are available from Books Inc.

Enter the Rafflecopter form HERE for your chance to win a paperback copy of The Sky is Everywhere. U.S. only. 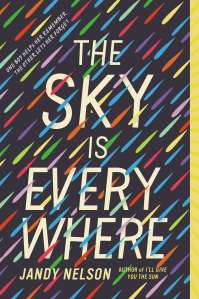 Be sure to check out the rest of the blog tour, featuring guest posts, interviews, giveaways, and more!

One thought on “Book Birthday Blog Tour: I’ll Give You the Sun by Jandy Nelson”