Offering a unique twist on a beloved fairy tale, The Stepsister’s Tale by Tracy Barrett gives readers a refreshing look at the story of Cinderella — one that will have you rooting for some unlikely heroines, and rethinking your definition of “happily ever after.” 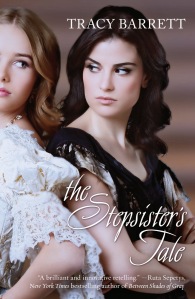 Jane Montjoy is tired of being a lady. She’s tired of pretending to live up to the standards of her mother’s noble family-especially now that the family’s wealth is gone and their stately mansion has fallen to ruin. It’s hard enough that she must tend to the animals and find a way to feed her mother and her little sister each day. Jane’s burden only gets worse after her mother returns from a trip to town with a new stepfather and stepsister in tow. Despite the family’s struggle to prepare for the long winter ahead, Jane’s stepfather remains determined to give his beautiful but spoiled child her every desire.

When her stepfather suddenly dies, leaving nothing but debts and a bereaved daughter behind, it seems to Jane that her family is destined for eternal unhappiness. But a mysterious boy from the woods and an invitation to a royal ball are certain to change her fate…

From the handsome prince to the evil stepsister, nothing is quite as it seems in Tracy Barrett’s stunning retelling of the classic Cinderella tale.

Barrett cleverly weaves in elements of the well-known Cinderella story, while giving her version a unique twist that is well-rooted in reality. No fairy godmothers here. Instead, you have some young women finding unexpected strength within, learning to be their own heroes.

The Stepsister’s Tale is more than a retelling from the “villain’s” perspective — it’s an alternate way to consider such a well-known story.

Though the narrative starts off slow (especially given we have a good idea how this story starts), it certainly picks up following the death of Jane’s step-father. Barrett gives readers plenty to chew over as the story continues to unfold, between the drama of surviving, dealing with the spoiled Ella, and encountering new characters in the woods. By the time the infamous royal ball arrives, readers are eager to learn how this new version of the Cinderella story will unfold.

The Stepsister’s Tale is in stores June 24th.

2 thoughts on “Book Review: The Stepsister’s Tale by Tracy Barrett”