During a dark time in world history, Stay Where You Are and Then Leave by John Boyne shows one boy’s determination and unrelenting hope in a beautiful portrait of love, strength, and how far we’ll go to save the ones who hold most dear. 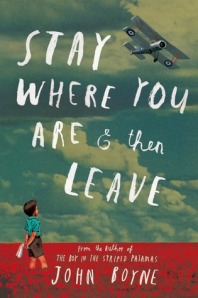 The day the First World War broke out, Alfie Summerfield’s father promised he wouldn’t go away to fight—but he broke that promise the following day. Four years later, Alfie doesn’t know where his father might be, other than that he’s away on a special, secret mission. Then, while shining shoes at King’s Cross Station, Alfie unexpectedly sees his father’s name on a sheaf of papers belonging to a military doctor. Bewildered and confused, Alfie realizes his father is in a hospital close by—a hospital treating soldiers with shell shock. Alfie isn’t sure what shell shock is, but he is determined to rescue his father from this strange, unnerving place. . . .

Boyne paints a captivating portrait of life for one boy during World War I – capturing the terror of Alfie’s neighbors, the fears and anxieties of his mother, and the realities that — while soldiers went off to war — back home, life moved on. Income, food, rent, all the necessities of daily life still needed to be addressed amidst this greater turmoil.

Woven in between his portraits of life during the war, Boyne shows one boy’s determination to help his family and bring his father home safely. It shows the courage of children during trying times. And it shows that adults don’t always know best, even if they think they do. Alfie is a glowing example that children are stronger than we so often give them credit for being, and are often braver in their innocence than adults are in their knowledge.

Stay Where You Are & Then Leaveis in stores March 25th.

One thought on “Book Review: Stay Where You Are & Then Leave by John Boyne”