It is rare these days to find a book so utterly unique and different from everything else out there, that when one does come along, it is near impossible to describe. That’s the case with Conjured by Sarah Beth Durst — a YA novel that defies genre definitions while capturing the imagination with a brilliant blend of magic, mystery, and crime drama. 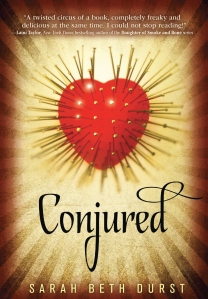 Eve has a new home, a new face, and a new name—but no memories of her past. She’s been told that she’s in a witness protection program. That she escaped a dangerous magic-wielding serial killer who still hunts her. The only thing she knows for sure is that there is something horrifying in her memories the people hiding her want to access—and there is nothing they won’t say—or do—to her to get her to remember.

At night she dreams of a tattered carnival tent and buttons being sewn into her skin. But during the day, she shelves books at the local library, trying to not let anyone know that she can do things—things like change the color of her eyes or walk through walls. When she does use her strange powers, she blacks out and is drawn into terrifying visions, returning to find that days or weeks have passed—and she’s lost all short-term memories. Eve must find out who and what she really is before the killer finds her—but the truth may be more dangerous than anyone could have ever imagined.

Durst is a master at creating some of the most unique novels to hit store shelves in recent years (not just in YA, either – I truly think her work stands out across the board) — and Conjured may be one of her most outstanding books yet.

She brilliantly blends a story about a witness protection program with magic and fantasy, as Eve tries to piece together the mystery of her past (and her present) under the pressure of an ever-looming deadline. Conjured is as original as fiction can get — all brilliantly and beautifully written.

Conjured defies traditional genres and ekes out its own corner of the bookshelves with a meticulously plotted story that will please fans of both literary and genre fiction. Between the sexy and horrifying circus that plagues Eve’s dreams, to the romance so powerful it makes books fly, to the ever-twisting mystery of Eve’s origin and the question of who (or what) she is really hiding from. Conjured is as enchanting to read as the magic Durst writes about.

Conjured is in stores now.