We are excited today to be hosting a stop on the official Matilda 25th Anniversary Blog Tour! Besides talking a bit about Matilda, we’ve also got information on the new Broadway musical AND a pretty awesome giveaway for you! 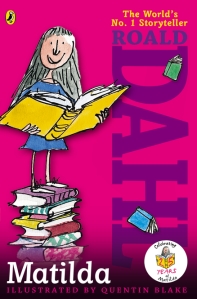 It’s hard to believe that Matilda is turning 25 this year (but heck, it’s hard to believe I’m turning *ahem* 30 *ahem* this year). To celebrate this milestone, Penguin is hosting an epic 25-stop blog tour — including this one, right here! Bloggers like myself are sharing our feelings about Matilda, and of course offering up some great prizes.

For this stop, Penguin asked: why is it important for kids to discover books, and how do you try to make that happen with books like Matilda?

The question was originally intended for teachers and librarians, but as I am neither, I will answer as a blogger who is passionate about literacy and encouraging kids (and teens, especially) to read.

For me, the real force behind what I do at Novel Novice, is the desire to help teen readers find The Book. That One Special Book which will be their gateway drug. Harry Potter, Twilight, and The Hunger Games … these are all popular series that have helped spark a passion for reading in teens. But they aren’t a universal solution.

See, the key to getting kids — teens, especially — excited about reading is to find the book that will hook them. That “one book” is different for everyone, and, let’s be honest, it’s rarely a book from the assigned reading list at school. Yes, I discovered some of my favorites thanks to assigned reading (namely, The Great Gatsby and The Catcher in the Rye) — but I also detested a good many of the books I was forced to read in school. The books I was truly passionate about were read outside of class. That’s a large part of why I started Novel Novice … to find ways of making required reading more tolerable; to relate the books you’re supposed to read with the books you want to read.

For lots of kids, Matilda is that gateway drug to reading. It doesn’t hurt that it’s a book about a little girl who loves reading. Matilda shoes us that reading is power. It’s an escape, it’s a source of strength, it’s a passion worth celebrating. It’s sort of a rallying cry of, “Book nerds unite!”

Tell us in the comments: What book was THE book for you? What got you hooked?

Did you know Matilda is now a Tony Award-nominated Broadway Musical? The show opened in April and has already been nominated for 12 Tony Awards, including Best Musical!

Since not everyone can go to New York City to see the show in person, Penguin Teen is bringing the show to you with a Matilda the Musical prize pack giveaway!

Roald Dahl (1916-1990) was born in Llandaff, South Wales, and went to Repton School in England. His parents were Norwegian, so holidays were spent in Norway. As he explains in Boy, he turned down the idea of university in favor of a job that would take him to “a wonderful faraway place.” In 1933 he joined the Shell Company, which sent him to Mombasa in East Africa. When World War II began in 1939 he became a fighter pilot and in 1942 was made assistant air attaché in Washington, where he started to write short stories. His first major success as a writer for children was in 1964. Thereafter his children’s books brought him increasing popularity, and when he died children mourned the world over. Matilda was published just two years before he died. Quentin Blake, the first Children’s Laureate of the United Kingdom, has illustrated most of Roald Dahl’s children’s books.

Matilda is a genius. Unfortunately, her family treats her like a dolt. Her crooked car-salesman father and loud, bingo-obsessed mother think Matilda’s only talent is as a scapegoat for everything that goes wrong in their miserable lives. But it’s not long before the sweet and sensitive child decides to fight back. Faced with practical jokes of sheer brilliance, her parents don’t stand a chance.