Today, I am so thrilled to be hosting an exclusive interview with Elizabeth LaBan, author of The Tragedy Paper, a stunning debut novel about love and loss that will surely one day be considered a classic, must-read story. It is the essence of coming-of-age undone in a beautiful, tragic manner.

Thanks to Elizabeth for stopping by, and her publisher for helping to arrange this interview!

There are so many different layers to The Tragedy Paper (the boarding school, winter, school traditions, romance, the struggles of being an albino, etc.). Tell us how the various elements of the book came to you as you started writing it. Which came first?

That is a great question – and not an easy one to answer! I guess the very first layer began to form after my agent suggested I read Johann Wolfgang von Goethe’s The Sorrows of Young Werther. It is a classic tragedy that tells the story of love that is not only misunderstood, but also unable to be given freely because of the circumstances the characters are in. It immediately struck me as a great story to attempt to modernize and retell in my own way. With it came the romance element of The Tragedy Paper. On top of that layer, the setting – both the Irving School and the winter season – developed quickly. From there I came up with more of the details including the characters – who they are and what they have to deal with – and the traditions of the school. 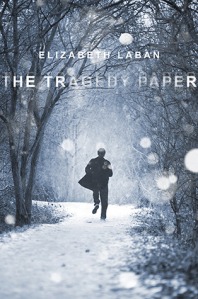 The book bounces back and forth between Tim’s POV and Duncan’s POV. Whose came first, and when did you decide to add the second voice?

The first character I wrote was Duncan. His walking under the archway at the beginning of his senior year was the very first sentence I wrote of The Tragedy Paper, and it still stands as the first sentence of the book! But at the same time – that same first attempt at the book – I had Tim’s voice in the letter to Duncan. So really, they were both there right away. As I got into writing the book, Tim’s voice and story developed a bit before Duncan’s did. And, interestingly enough, one of the things that was changed during the editing process is that Tim talks more directly to Duncan than he did in my very first draft – which I like so much better (thank you Erin Clarke!) – because it ties the two together even more than I originally did. For me, I guess, there really was never one without the other.

This is suggested in the narrative towards the end of the novel — but do you think Duncan is overly-sensitive to the “tragic” nature of Tim’s story because he is so entrenched in this idea of a tragedy paper?

I do. I think, even without that backdrop, Duncan would be pulled into Tim’s story. But the idea that he is learning about tragedy – and reading so many tragedies – with words like order and chaos, magnitude, and monomania, swirling around in his head, adds a sinister nature to what he is going through, and formalizes it in a way.

You mention in your notes at the end of the novel that you had a teacher who assigned you a “tragedy paper.” What was your tragedy paper about?

My assignment was to define tragedy in the literary sense, which for me also meant talking about how different or similar that might be to a tragic happening, and then discuss if literary tragedy could exist in modern literature. I focused on Eugene O’Neill’s Long Day’s Journey Into Night. In the end, I concluded that it was not a tragedy, in the literary sense, and agreed with Geoffrey Brereton who wrote Principles of Tragedy when he said, “The twentieth century respects tragedy but does not produce it.” I loved writing that paper, and I am very pleased to say I got an A. But I think I don’t believe that last statement anymore. I have come to think that tragedy most certainly can exist in contemporary writing.

What do you think defines a tragedy?

My basic definition could be as simple as Duncan’s at the beginning of the book – when something bad happens. But there is more to it for me, especially in the literary sense. It has to do with the character’s bringing about his or her own downfall, and making decisions that hold great magnitude – though most likely they don’t seem to hold much importance when they are being made – that eventually do the person in in one way or another.

Living or dead, who would you like to have dinner with?

Paris or London with my family

My Wicked (as in the Broadway musical) coffee mug, an ARC of The Tragedy Paper, a stack of reporter’s notebooks, a whoopie pie cookbook, and the DVD of The Outsiders from Netflix

The Tragedy Paper is in stores now — and I HIGHLY recommend you check it out!!

One thought on “Elizabeth LaBan: The Tragedy Paper Q&A”