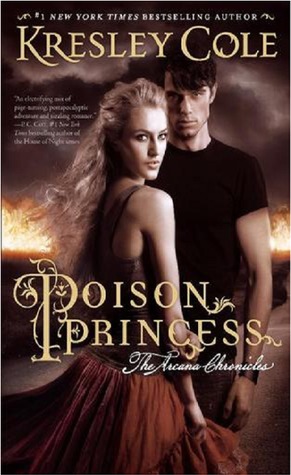 The Apocalypse has never been so sexy as it is within the pages of Poison Princess by Kresley Cole, the first in a new riveting series from the NYT bestseller.

The book follows Evie Greene — whose charmed, Southern life is thrown into upheaval first by troubling visions of the Apocalypse (which get her sent to the nut house) and then by the Apocalypse itself! As Evie teams up to survive with bad boy Jackson, she learns that there are other teens with supernatural powers like her own — and it’s all part of a brewing battle, and Evie’s not quite sure if she’s one of the good guys … or one of the bad guys.

The true brilliance of Poison Princess is that it shows us a distinct before and after. Unlike most dystopian thrillers, we get to see what life is like for Evie in a contemporary setting — and then witness the Apocalypse actually happening, and the immediate impact it has on Evie’s life.

Evie’s world is fully-developed and filled with plenty of conflict already (a mental illness, a missing father, boyfriend drama, and trouble with the sexy new bad boy in school). All of these dilemmas get turned around and twisted as the world ends and Evie must face life after the Apocalypse.

Carrying the drama from pre- to post-Apocalypse is the emotional dance between Evie and Jackson, the smoldering and troubled Cajun boy from the wrong side of town who worms his way into Evie’s life. He’s there before the world ends, and again after — tantalizing and teasing both Evie and readers with his delightful accent (so brilliantly written!), troubled past, bad boy behavior, and heroic charm. The tension between Jackson and Evie oozes off of every page, and it is oh-so-delicious.

Poison Princess is a riveting ride, and promises even more thrills as the series continues. I can’t wait to see what happens next!

Poison Princess is in stores today. Here is the official synopsis:

Sixteen year old Evangeline “Evie” Greene leads a charmed life, until she begins experiencing horrifying hallucinations. When an apocalyptic event decimates her Louisiana hometown, Evie realizes her hallucinations were actually visions of the future—and they’re still happening. Fighting for her life and desperate for answers, she must turn to her wrong-side-of-the-bayou classmate: Jack Deveaux.

But she can’t do either alone.

With his mile-long rap sheet, wicked grin, and bad attitude, Jack is like no boy Evie has ever known. Even though he once scorned her and everything she represented, he agrees to protect Evie on her quest. She knows she can’t totally depend on Jack. If he ever cast that wicked grin her way, could she possibly resist him?

Who can Evie trust?

As Jack and Evie race to find the source of her visions, they meet others who have gotten the same call. An ancient prophesy is being played out, and Evie is not the only one with special powers. A group of twenty-two teens has been chosen to reenact the ultimate battle between good and evil. But it’s not always clear who is on which side…