We continue our exploration of myths and themes relating to our June Book of the Month Of Poseidon by Anna Banks today, with a look at Triton & Poseidon. Readers of the book will discover that Triton and Poseidon represent warring factions of mermaids (or “Syrena”) in the novel. But their roots are a bit different. 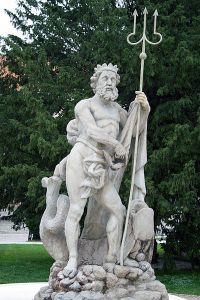 In Greek mythology, Poseidon is known as the “God of the Sea” and is one of the twelve Olympian gods and goddesses. In Roman mythology, he was known as Neptune.

The brother of Zeus and Hades, stories by Homer and Hesoid describe how Poseidon became ruler of the sea. After the three brothers defeated their father Kronos, the world was divided thusly: the sky to Zeus, the underworld to Hades, and the sea to Poseidon — with Earth and Mount Olympis belonging to all three.

Besides ruling over the sea, Poseidon is also often referred to as the “Earth Shaker” for causing earthquakes. He is also a key figure in Homer’s Odyssey, being the major driving force behind events (rather than Zeus). 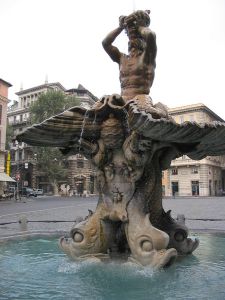 In Greek mythology, Triton calls Poseidon “dad.” Yep, he is the son of Poseidon and is the messenger of the sea. His mother is Amphitrite, the goddess of the sea.

Triton is often depicted in art in the appearance of a merman: the body of a man with the tail of a fish. Both Triton and Poseidon are seen carrying a trident in traditional art, but Triton is also known for carrying a conch shell — which would serve as a trumpet to either calm the waves or stir them up.

According to Greek mythology, Triton and his parents lived in a golden palace under the sea — though its exact location varies greatly.

Triton was later associated with mermaid-like creatures known as “the Tritons,” who acted as escorts for “marine divinities.”

One thought on “Of Poseidon: Triton and Poseidon in Mythology”