Today, I am so thrilled to be taking part in the 50 Years, 50 Days, 50 Blogs Tour in celebration of the 50th anniversary of A Wrinkle in Time by Madeleine L’Engle.

I first read this book when I was in seventh grade, when it was assigned as summer reading for school — but I loved it so much, I proceeded to read the entire series that very same summer. This was one of those series that impacted my reading choices as a teen and into adulthood, and that’s part of why I’m so thrilled to see A Wrinkle in Time back in the spotlight for its 50th anniversary.

When I was asked to be part of this blog tour, I was asked to write about a character in the book — and immediately claimed Charles Wallace. The younger brother of the main character, Meg, Charles is one of the most unique characters I’ve ever encountered.

A five-year-old super genius, Charles Wallace is central to the plot of A Wrinkle in Time — and in many ways, is the catalyst that propels the story forward. First, he is the one to introduce Mrs Whatsit to Meg and the rest of his family — thus propelling them on a journey to find their father. Later, Charles Wallace becomes trapped on a planet when he is telepathically taken over by a being known as IT — launching the final climax of the book, in which his sister must rescue him. 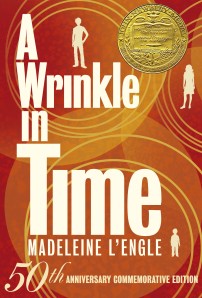 Charles Wallace is one of those characters you can’t help but love. He is brilliant and kind and loving, but also young and vulnerable. Not only does the main protagonist Meg adore him — but so, too, does the reader.

Find out for yourself what there is to love about Charles Wallace and A Wrinkle in Time in the new 50th anniversary edition, now in stores everywhere!

The new, 50th anniversary edition of A Wrinkle in Time includes:

Be sure to check out the Wrinkle in Time facebook page & visit the other blogs on the 50 blog tour!

And finally, here is the book trailer for the 50th anniversary edition, which is stunning & makes me feel all kinds of nostalgic:

One thought on “A Wrinkle in Time – 50th Anniversary Blog Tour”