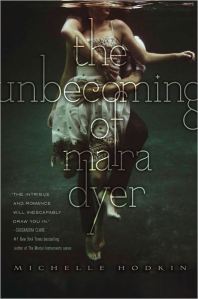 Rarely does a book come along that is so unique/sexy/dark, all the other books on the shelf hide their covers in embarassment.

The Unbecoming of Mara Dyer by Michelle Hodkin is one of those instances.

First, a little background: Mara and her family move across the country to escape the horrible accident that left her in the hospital and three classmates dead. She has no memory of what happened, but enough psychological trauma to bury her in a dark hole from which we’re not sure she can escape. Until she meets Noah Shaw (Oh, Noah …) , who seems nearly as damaged as she is, but hell-bent on pulling her out of that black hole.

Deciphering what is real and not real becomes more difficult as Mara and Noah uncover layers of what seems to be mind-bending madness coupled with unusual abilities. It all comes together in a perfect cliff-hanger ending that will no doubt result in an onslought of outcries to Hodkin, begging her for more. Now.

That said, it’s difficult to explain just how witty, sexy and seductive Mara Dyer is without spoiling its clever clue-dropping and plot twists. Mara is a perfect example of an unreliable narrator, and yet, Hodkin makes you want to be her. A fleshed-out cast of supporting characters further bolsters her and the plot, its momentum and thrumming tension, especially Jamie, Mara’s “token black Jewish bi friend”.

Now, Noah Shaw deserves a paragraph of his own. If you put the personality of The Mortal Instruments’ Jace Wayland into Robert Pattinson’s body, add a couple million dollars and a soft spot for strays and racy double entendres, you’ll probably come pretty close to Noah. He’s a character that must be experienced (savored, re-read, drooled over), rather than described.

And finally, a word about the writing itself. Take notes, boys and girls. Find passages you like and dissect them. Figure out how they work so darn well. Chemistry’s a hard thing to write, but Hodkin is already a master with this, her first novel. Add Mara Dyer to your list of books that practically come alive in your hands.

5 thoughts on “The Unbecoming of Mara Dyer by Michelle Hodkin: Steph’s review”