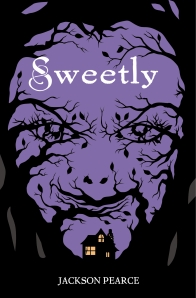 Whereas Sisters Red offered a new take on the Little Red Riding Hood tale, Sweetly is a a modern twist on Hansel & Gretel:

Twelve years ago, Gretchen, her twin sister, and her brother went looking for a witch in the forest. They found something. Maybe it was a witch, maybe a monster, they aren’t sure—they were running too fast to tell. Either way, Gretchen’s twin sister was never seen again.

Years later, after being thrown out of their house, Gretchen and Ansel find themselves in Live Oak, South Carolina, a place on the verge of becoming a ghost town. They move in with Sophia Kelly, a young and beautiful chocolatier owner who opens not only her home, but her heart to Gretchen and Ansel.

Yet the witch isn’t gone—it’s here, lurking in the forests of Live Oak, preying on Live Oak girls every year after Sophia Kelly’s infamous chocolate festival. But Gretchen is determined to stop running from witches in the forest, and start fighting back. Alongside Samuel Reynolds, a boy as quick with a gun as he is a sarcastic remark, Gretchen digs deeper into the mystery of not only what the witch is, but how it chooses its victims. Yet the further she investigates, the more she finds herself wondering who the real monster is, and if love can be as deadly as it is beautiful.

Pearce’s skills for adapting & modernizing fairy tales is nothing short of brilliant. It’s delightful seeing bits and pieces from the world of Sisters Red crossing over into Sweetly — in moments both subtle and more obvious. You can see how it fits into the same universe of Sisters Red — yet at the same time, Sweetly is wholly accessible to someone who hasn’t read the first book.

Likewise, you can see how Pearce is setting up for yet another companion book — and all I can say is: bring it on. (Especially because all hints are pointing to a Little Mermaid adaptation — only my favorite fairy tale of all time.)

Much as in Sisters Red, Pearce once again writes a book featuring some strong, ass-kicking girl characters! (Something I like to call the “Buffy factor.”) Gretchen does a lot of growing up in this book, and while her fears are frustrating at first — as a reader, it’s entirely rewarding to see her own those fears and fight back. Pearce’s other characters also hold their own: from the swoon-worthy Samuel, to loyal brother Ansel, to the sweet yet mysterious Sophia Kelly.

But really, the key to Sweetly’s success is the way Pearce builds up the mystery at the heart of the book. Even for readers who remember Sisters Red, there are new secrets to uncover and the reader is right there along with Gretchen as she peels back layer upon layer until the truth is finally revealed amid a dramatic, action-filled climax. (Cue some of that ass-kicking I was talking about.)

Toss in some shooting lessons and sizzling chemistry with the mysterious new guy in town, some delectable sweets that will have you craving chocolates and candied fruit, and you have a winning combination.

Sweetly is in stores August 23rd. Tune in all month-long as it’s also our August Book of the Month!