In The Revenant by Sonia Gensler, main character Willie runs away from home and becomes a teacher at the Cherokee Female Seminary in “Indian Territory” (ie, eastern Oklahoma). Before arriving, Willie has some misguided notions about what to expect — and part of her journey is learning what the Cherokee people are really like. 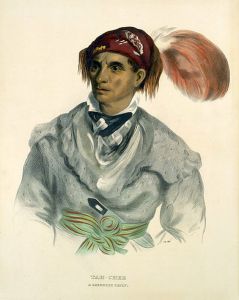 For today’s history lesson, we focus on the Cherokee Nation itself.

The Cherokee were originally located in the Southeastern U.S., particularly in Georgia, North & South Carolina, and Tennessee — but as we shared yesterday, they were relocated in 1838 to Indian Territory in eastern Oklahoma as part of the Indian Removal Act of 1830 — known as the “Trail of Tears.”

It’s in this area of Oklahoma where most Cherokee still live today. Currently, the Cherokee Nation has some 300,000 members and is one of the largest Native American tribes in the U.S.