We were delighted to be invited to participate in a fun “webinar” Q&A with Forgotten author Cat Patrick, along with fellow book bloggers The Story Siren, Galleysmith, and Pageturners. We chatted with Cat on the phone, asked our questions, and had plenty of laughs in between. Below, you’ll find the transcript from our questions for Cat — but be sure to visit the other sites for their Q&As. Plus, keep reading this post for your chance to win a signed copy of Forgotten! 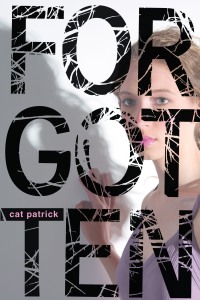 Novel Novice (NN):  So, my question is do you think, in the future, like when–as London goes on and keeps living her life, it seems like she was starting to remember more of her past memories.  Do you think she’ll ever get them all back?  And do you think she wants to?

No, I think–I don’t–no, I don’t think she–I don’t necessarily think that she wants to.  I think, by the end of Forgotten, I guess the message that I wanted to convey is, you know, whatever your deal is in life, you know, we all sort of have our things, and you just learn how to deal with them and learn how to see yourself as special for whatever is in your life.

NN:  You sort of made some reference to it earlier, so I wasn’t sure if you had any plans for a sequel.  And if you did, would we get to find more out about what happens to London after, because it sounds–I mean, everything felt really nicely wrapped up at the end.  But, it almost felt like, I don’t know, there’s still more to learn.  Like, we could spend more time with her and still learn more things about her.

NN:  So, I was gonna see if you had any plans to write more about her, and if not, what are you working on?

CP:  Okay.  Well, I–so, when I originally thought of the book, I thought, oh, for sure, it’s gonna be a series.  And–but then, as I was writing and as I–when I finally found the right ending, I just felt like, oh, this–you know, I was so happy and I felt, okay, that’s exactly how I want it to end, because I’m not someone who likes things just wrapped up with a neat little bow.

And what I like about the ending is it’s hopeful and it gives you enough, but it doesn’t completely tell you everything because I like the idea that people can then use their imaginations a little bit and sort of dream about what happens to her.

But, I do understand that the people are wanting more.  I tell you, that is the number one question I’ve been getting from people.  It’s so great.  I’m seeing all these fan emails, and I’d say probably 97 percent of them ask about the sequel, and I’m just disappointing people left and right because I’m not planning on it right now.

But, what I am working on is another book.  I’m actually almost just about finished with edits on my second book.  It’s coming out from Little Brown a year from now, so in June 2012.

And I can’t share too much about it yet.  I wish I could.  I actually asked my editor if I could say more about it, but they want to announce it at some certain point, and–but, I can say that I think that my niche of writing is what I’m calling sort of strange in Normalville.  I don’t necessarily want to create whole new worlds.  I would rather look at something in our world and just tweak it a little and, you know, make it atypical.

And so, I think that’s kind of what I tend to be interested in, and I feel like Forgotten falls into that genre, and my next book does, as well, and so does the third book that I’m kind of dreaming about right now, too.  So, hopefully, it won’t be a disappointment after Forgotten.

NN:  I didn’t–I think it’ll be great, and I actually really liked the ending of Forgotten.  But, it just–.

NN:  –It left possibilities open, so I just was wondering.

CP:  Yes, yes.  Well, I think that’s a good thing because, I mean, you know, I’ve learned never say never, for sure.

NN:  I actually have a series of five very short questions I’d like to ask, if that’s okay with everyone?  We do these in our Novel Novice interviews, and they’re called flash questions.

NN:  So–all right.  If they made a Cat Patrick candle, what would it smell like?

CP:  My personal theme song – I don’t know.  All that’s in my head right now is “We Are the Champions.”

NN:  Good one.  You’re on a deserted island and you have only one book to read for the rest of your life.  What is it?

CP:  I can do the Axel Rose dance.

CP:  It’s the cheerleader one with Cheri Oteri and Will Ferrell.

So — want to win a signed copy of Forgotten? Here’s how:

Just fill out the Novel Novice Forgotten Contest Entry Form to be automatically entered in a drawing to win.

All entries are due by Monday, July 4th at midnight (PT)

What if every day when you woke up, you had no recollection of the days before?

Each night at precisely 4:33 am, while sixteen-year-old London Lane is asleep, her memory of that day is erased. In the morning, all she can “remember” are events from her future. London is used to relying on reminder notes and a trusted friend to get through the day, but things get complicated when a new boy at school enters the picture. Luke Henry is not someone you’d easily forget, but try as she might, London can’t find him in her memories of things to come.

When London starts experiencing disturbing flashbacks, or flash-forwards, as the case may be, she realizes it’s time to learn about the past she keeps forgetting – before it destroys her future.

On a rainy November morning, new baby sleep deprived, Cat Patrick forgot what she was doing. She retraced her steps but instead of remembering, the idea for Forgotten was born.

Cat lives near Seattle with her husband and twin daughters who now, thankfully, sleep through the night. Forgotten is her debut novel.