Today, we’re helping you get ready for summer with an awesome summer book giveaway — with not one, but TWO great new reads! Keep reading for details …

Just fill out the Novel Novice Summer Reads Giveaway Entry Form, and tell us your favorite place to read during the summer. One winner will randomly be chosen from the entries!

Prize pack including a tote bag and copies of Moonglass by Jessi Kirby and We’ll Always Have Summer by Jenny Han.

All entries are due by Monday, May 23rd at midnight (PT).

Here’s more about each book:

When Anna was little, she and her mother used to search for sea glass, but since they looked at night, they called it moonglass.

Now, ten years after her mother’s mysterious death, her father is working as head lifeguard on the same beach where her mother grew up and her parents first met and fell in love. Reluctant to get close to anyone (including her father) and not pleased about having to start at a new school, Anna begins to spend more time alone, running the length of the beach and wondering about who her mother really was. After meeting a lifeguard named Tyler, she slowly lets her guard down and together they start exploring the abandoned houses that dot the beach.

But when learning more about her mother’s past leads to a painful discovery, Anna must reconcile her desire for solitude with ultimately accepting the love of her family and friends. Moonglass is a dazzling debut from an undeniable talent.

“I couldn’t put this book down. Kirby’s voice is fresh and wise, all at once. An incredible first novel.” — Sarah Dessen, New York Times bestselling author of Lock and Key 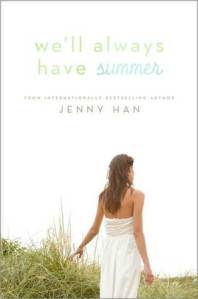 Jenny Han’s bestselling trilogy, which includes The Summer I Turned Pretty and It’s Not Summer Without You, concludes with an impossible  choice in We’ll Always Have Summer.

Belly has only ever been in love with two boys, both with the last name Fisher. And after being with Jeremiah for the last two years, she’s almost positive he is her soul mate. Almost. Conrad has not gotten over the mistake he made when he let Belly go even as Jeremiah has always known that Belly is the girl for him. So when Belly and Jeremiah decide to make things forever, Conrad realizes that it’s now or never–tell Belly he loves her, or lose her for good. Belly will have to confront her feelings for Jeremiah and Conrad and face a truth she has possibly always known: she will have to break one of their hearts.

Also check out the quiz — would you choose Conrad or Jeremiah?

And here’s the book trailer: