They always say you should never judge a book by its cover. But guess what? I do. Frequently. 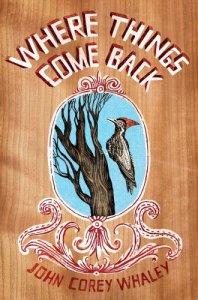 Now, a book must be good in and of itself to be successful — but when it comes to first impressions, its often the cover itself that draws you in; makes you pick a book up off the shelf and open up to that jacket flap copy and see what it’s all about.

When it came to Where Things Come Back by John Corey Whaley, I was in love before even opening up the book. Just LOOK AT THAT COVER. It’s all sorts of wonderful, and really, it’s a work of art in and of itself. With that in mind, it should come as no surprise that an artist is behind the cover.

Grady McFerrin is the man behind the cover for Where Things Come Back, and in my Internet stalking, I managed to get in touch with Grady to gush about my love of his work, and to talk about how he created this masterpiece. The below Q&A is paraphrased, since Grady & I chatted on the phone and I’m pretty horrible at transcribing conversations as they happen — but you’ll get the gist of what we talked about.

Novel Novice: I love the cover you created for Where Things Come Back, and I’m a big fan of the other work showcased on your website. What’s your background?

Grady McFerrin: I’m an illustrator, really. I got my start mostly through the music world, doing posters, then album artwork for bands.

GM: Uh … all sorts, mostly indie rock bands like Modest Mouse, Wilco, The Decemberists. I have done  quite a few commemorative posters for the Fillmore in San Francisco, which is kind of where the psychedelic rock poster was born in the 60s.  I’ve always really admired the work of the Haight-Ashbury poster artists and have definitely drawn inspiration from that scene.

NN: So how did Simon & Schuster get in touch with you? How did you end up doing the cover for Where Things Come Back?

GM: Ah, you know, that’s weird. I sort of can’t remember exactly. I think he [art director, Michael McCartney] had seen my music posters somewhere, because that’s what we talked about mostly. Or maybe he saw my work in a trade magazine and contacted me. But he was really into capturing that same general tone or mood of some of my music posters. That’s what he said they wanted the cover to feel like.

NN: Did you get to read any of Where Things Come Back before working on the cover?

GM: I did, I read the manuscript. It was great. I don’t read a lot of YA, but it had this sort of timeless feel to it. A coming of age story — something like Catcher in the Rye, which can be read and enjoyed by adults, as well as teens, because they’ve already been through that experience and can relate to it.

NN: How did you create the cover for Where Things Come Back? It’s got a very mixed-media look to it.

GM: I draw everything by hand, then scan it into the computer and put it together in Photoshop. It’s digital, that’s what I tell people, but it’s also handmade. If that makes sense?

NN: Did you create a whole typeface for the lettering? It looks like S&S used the same stylized text in other promotional items for the book.

GM: I didn’t create a typeface. It’s just hand-lettered. I lettered it and integrated it into the cover. Simon & Schuster just wanted something sans serif. They might have made a typeface out of it later, but I didn’t.

NN: Where can people check out more of your artwork?

GM: Just go to my website, I have a “for sale” section. I also have a stationery line through Chronicle Books, which is online.

Grady also told me that you can see some of his art in the new Emerald Atlas books. He didn’t do all of the art, but he helped create a map/atlas that goes around the outside of the cover, as well as some of the interior page headings. He says it has a very different feel than the cover of Where Things Come Back, but it was fun to work on. Grady’s also done some cover work with Random House, especially in their YA section — which he credits his wife with for encouraging him to pursue.

Many thanks to Grady for chatting with me — and I highly recommend you head over to his website to check out more of his fantastic art!

3 thoughts on “Judging a Book by its Cover: Where Things Come Back”