There are not enough words to fully describe how much I love Holly Black’s Curse Workers series. The whole “Mobsters & Magic, Curses & Cons” concept is so original and works so well the way Black has written it. I fell in love with this world in the first book, White Cat. And everything I loved about that first book is back and then some in book 2, Red Glove. 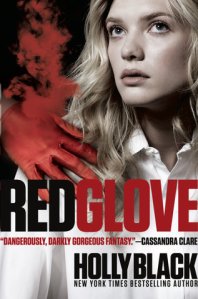 As Red Glove opens, we find Cassel Sharpe dealing with the aftermath of events in White Glove. He’s struggling with a lot of issues, not the least of which is his cursed love with Lila and his brothers’ betrayal. But in the midst of his own personal turmoil, Cassel’s oldest brother is murdered. Suddenly, Cassel finds himself pitted between the FBI, who wants his help solving the crime, and the mob, who wants Cassel, too. He’s also nearing the end of his high school career, and the future is looming large: what will he do with his life? What choices will he make? Cassel finds it harder and harder to make the right choices, especially when he’s not sure who to trust — least of all, himself.

Red Glove is a success on every level. The characters are great. The plot is great. The twists and surprises are genuinely twisty and surprising. And unlike so many series, as book two in a planned trilogy, Red Glove does NOT suffer from “middle book” syndrome. There’s no struggle to keep things interesting and engaging. It’s just as fabulous as the first book and will make you want to keep reading.

One of the qualities that makes Cassel such a fantastic character is the genuine fine line he walks between good and bad. He’s not just “play-acting” at being bad, but he’s also not completely evil. His struggle to choose between these two sides is authentic and real; not contrived or forced. It’s evident in both his actions, thoughts and dialogue — and in the interactions he shares with other characters: Lila, his friends, his family, the FBI, the mob.

Much like White Cat, Red Glove is chock full of themes revolving around family and friends, loyalty, and the consequences of the choices we make. Part of what enhances these themes and helps enrich the world this story takes place in is the backdrop its set against: political turmoil. Social unrest. The world of the Curse Workers series isn’t our own, yet it’s so familiar that it’s easy to relate to.

In Red Glove, it’s evident that a lot of things are changing: Cassel’s life (the transition from teenagedom to adulthood), Cassel’s relationships (with Lila, with his friends, and with his family), and the world around Cassel. It’s a journey that, on some level, everyone is familiar with. We’ve all been through changes like this. But Cassel’s story is all the more intriguing for the added drama he’s facing: the mob world, curse working, etc.

Red Glove is a book that both terrifies and intrigues. It’s a frightening allure, but one I simply can’t resist. I just want to spend more time with Cassel and his fellow cast of characters, and the magical mobster world they inhabit.