You’ll forgive me, I hope, for posting this so belatedly … but I was a bit preoccupied devouring Mockingjay by Suzanne Collins. (It was perfect — my full review coming later today here at Novel Novice, or check it out now at The Hunger Games Examiner – spoiler free!).

But first, a quick post about the fun times had at the midnight release party (essentially a party in line wrapped around the outside of the building) at Powell’s Books in downtown Portland with friends Lisa Schroeder (who dressed as pre-Games Katniss, complete with bow & arrows) and Suzanne Young.

She pretty much rocks as Katniss, right? She showed off her archery skills later in line when Suzanne got a little out of hand rereading all the hot Peeta make-out scenes: 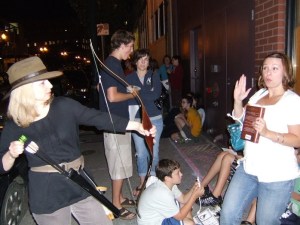 But then Suzanne & I made peace as we shared our favorite Peeta make-out scenes (Team Peeta FTW!): 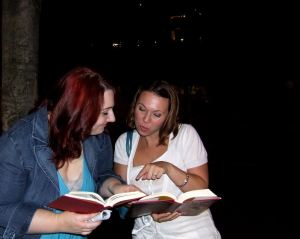 We didn’t stage that photo at ALL* (*yes we did, we totally did). Then, after a brief pause to dork-out and take a Facebook-style self-portrait together:

… then we finally got to get our books! Inside the store, hundreds of shiny new copies of Mockingjay sat nestled in a golden Cornucopia (Hunger Games arena-style) and it was even surrounded by the bodies of “dead tributes.” Morbid, I suppose. But sort of hilarious, too.(Also, kudos to the Powell’s staff members for dressing as Peacekeepers and sparkly Capitol residents!)

And at last, it’s ours! We’ve got our hands on Mockingjay, and then it’s a race home to start reading!

Plus, a Powell’s bonus:  a commemorative stamp marking the midnight release party:

For the comments: Did you go to a midnight release party for Mockingjay? Tell us all about it!