We are flipping out over Flipped, the new heartwarming movie from director Rob Reiner — that’s based on the book by Wendelin Van Draanen. Flipped is a movie that explores the return to the simplicity of first love as a teenager along with great family values, in a story that everyone can relate to. It is a perfect introduction to the adolescent war between the sexes.

And tomorrow, you can chat LIVE with Flipped director Rob Reiner and actress Madeline Carroll. Just log in to the live video stream on the Flipped Facebook page tomorrow, August 26th, at 7pm ET/4pm PT to ask your questions!

Meanwhile check out the movie trailer & read the synopsis for the novel: 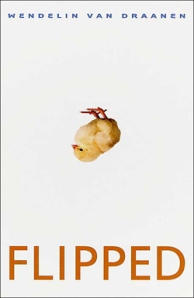 Juli Baker devoutly believes in three things: the sanctity of trees (especially her beloved sycamore), the wholesomeness of the eggs she collects from her backyard flock of chickens, and that someday she will kiss Bryce Loski. Ever since she saw Bryce’s baby blues back in second grade, Juli has been smitten. Unfortunately, Bryce has never felt the same. Frankly, he thinks Juli Baker is a little weird–after all, what kind of freak raises chickens and sits in trees for fun? Then, in eighth grade, everything changes. Bryce begins to see that Juli’s unusual interests and pride in her family are, well, kind of cool. And Juli starts to think that maybe Bryce’s brilliant blue eyes are as empty as the rest of Bryce seems to be. After all, what kind of jerk doesn’t care about other people’s feelings about chickens and trees? With Flipped, mystery author Wendelin Van Draanen has taken a break from her Sammy Keyes series, and the result is flipping fantastic. Bryce and Juli’s rants and raves about each other ring so true that teen readers will quickly identify with at least one of these hilarious feuding egos, if not both. A perfect introduction to the adolescent war between the sexes.

For the comments: Have you read Flipped? Will you go see the movie?