She’s fierce, she’s out for revenge and she figures prominently in Cassandra Clare’s Clockwork Angel. 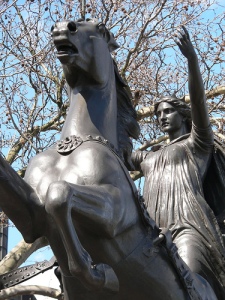 She’s Boadicea or Boudica. She and her husband ruled the Iceni, a Celtic tribe during the first century AD, but upon his death, the Romans — who occupied Britain at the time — tried to wrestle control away from her. She was publicly flogged and made to watch while her daughters were raped.

Described by Dio Cassius as “huge of frame, terrifying of aspect, and with a harsh voice. A great mass of bright red hair fell to her knees: She wore a great twisted golden necklace, and a tunic of many colors, over which was a thick mantle, fastened by a brooch. Now she grasped a spear, to strike fear into all who watched her . . . .” Boadicea revolted and led an army against the Romans, slaughtering some 70,000-80,000 troops. She very nearly drove the Romans out of Britain, but the tide turned and rather than be captured, she allegedly killed herself. (Some sources say she fell ill and died.) She is often portrayed rallying her troops from her chariot, her disgraced daughters at her side.

Her story was buried for centuries until is was revived during the Renaissance and Victorian England. Queen Victoria was said to be her “namesake,” inspiring her poet laureate, Alfred, Lord Tennyson, to write a poem titled Boadicea, which is quoted by one character to another:

“So the Queen Boadicea, standing loftily charioted,/Brandishing in her hand a dart and rolling glances lioness-like–” Will broke off at Tessa’s look of incomprehension, and grinned. “Nothing? If you were English, you’d know …. Regardless, she was a powerful warrior queen. When she was finally defeated, she took poison rather than let herself be captured by the Romans. She was braver than any man.”

In fact, several of the female characters are compared to Boadicea throughout Clockwork Angel for their fighting abilities, their apparent blood lust and bravery in the face of danger — all while living in the “man’s world” of Victorian England. One character even sees a loved one tortured, like Boadicea and her daughters.

It’s unclear whether this theme will be carried through to the other two books in the series, but you can bet it comes into play in a big way in Clockwork Angel.

For more information on Boadicea, here are some great sources:

One thought on “Clockwork Angel by Cassandra Clare: Boadicea”