It all starts with one man of many names: Vlad the Impaler, Vlad Ţepeş, Vlad Dracul III, Prince of Wallachia. He was immortalized (forgive the pun) in the Western world by Bram Stoker in 1897, when Dracula made its debut. 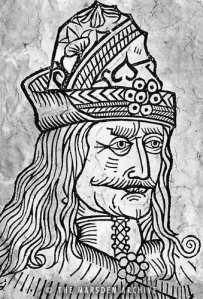 Vlad was born in Transylvania in 1431, a son of the ruling family. At 5 years old, he was initiated into the Order of the Dragon (Dracul), of which is father was already a member. He received a well-rounded education but was handed over to Ottoman enemies by his father as a “hostage of loyalty.” During this time, he was often beaten and this is where he first witnessed impalement.

Vlad was eventually released and even educated by the Ottomans. He also received combat training. His father was overthrown and his older brother murdered, so the Ottomans invaded and put Vlad III on the throne. Then he was overthrown, too. Fast forward through a nasty, ongoing war, and Vlad was restored to the thrown in about 1456. He tried to restore his ancestral kingdom but was thwarted by his old ‘frenemies,’ the Ottomans.

They sent an army to Wallachia and what do they find? A “forest of stakes on which Vlad had impaled 20,000 of Mehmed’s previous Ottoman army.” There are also legends of Vlad nailing turbans to Mehmed’s envoys’ heads.

Vlad enjoyed a number of other successful war campaigns but became a little too successful as far as the government was concerned. When he returned to his homeland, tired and broke, he was arrested and thrown in prison for treason.

Throughout all this, he managed to get married and have a child, but his wife, faced with capture by the enemy during one of the battles, threw herself from the castle and into the river below. After his imprisonment, he remarried and had a few more children. He was returned to the throne (again!) but killed shortly after during battle.

His body was decapitated and the head sent to Constantinople where it was displayed on a stake to prove that he was finally dead. The location of his remains is a mystery. 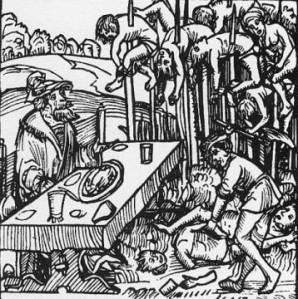 Stories of his atrocities spread throughout Eastern Europe and were likely enhanced by the time they reached Western Europe. However, even the true stuff is disgusting. His favorite method of impalement involved tying each of the victim’s legs to a horse and slowly forcing a sharpened stake through the body.

Uhm, ick? And we’re not talking a couple criminals here and there. We’re talking tens of thousands of people, young and old, male and female.

We’ve established that Vlad was a sadistic freak, but there’s nothing to suggest a blood-sucking fetish. The vampire connection is purely a creation of Bram Stoker’s imagination. Vampire folklore had been prominent in that part of the world for centuries, but it was Stoker who borrowed the infamous figure’s name and wove a fanciful story around it.

He may have read about Vlad in a book called An Account of the Principalities of Wallachia and Moldavia: with various Political Observations Relating to Them by William Wilkinson or Vlad’s story may have been mentioned by a Hungarian professor friend from Budapest.

More recent research indicates that Stoker knew very little about the real life of Vlad, other than his name and basic story. Whatever the case, the name Dracula and vampirism are eternally linked thanks to the fanciful imagination of Bram Stoker.

One thought on “STBM: The legend of Vlad Dracul, the Impaler”