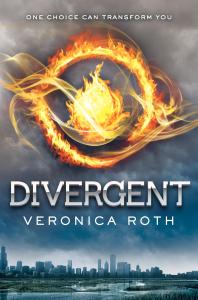 The book is chock-full of fast-paced action, disturbing violence, a frightening dystopic society and spine-tingling romance. I was completely swept away by Divergent, and for days after reading it was haunted by this strange society and the events of the first book in this new trilogy.

Divergent takes place in a futuristic society in what was once Chicago, where society is divided into five factions. Upon turning 16, everyone must choose which faction they wish to belong to — possibly separating themselves from their families forever. That’s the tough choice facing 16-year-old Tris, who doesn’t quite fit in anywhere. So when she chooses to abandon her family and join the brave and fearless faction known as Dauntless, Tris not only leaves her family behind — but starts to learn a lot about herself, and the secrets her government may be keeping.

Tris is a stand-out heroine for YA readers. She’s got all the guts and courage of Katniss Everdeen — except in Divergent we actually get to witness Tris’s transformation into this tough person and her continued struggles to overcome her own fears and insecurities. She is matched nicely with the mysterious young man known as Four. He’s intriguing and fascinating; frightening and enthralling. Much like Tris, you’ll find yourself frustrated by , falling in love with, and running away from him, all in equal parts.

But Four’s secrets are just a small part of the mysteries layered within Divergent. Why is Tris’s status as a “Divergent” so dangerous and threatening to the factions? What’s up with all those factions, anyway? What is the government hiding? What secrets are her family members keeping? It seems the more Tris learns about her new life, the more mysteries unfold. The result of this technique is a book that you simply can’t put down.

Tris and Four aren’t the only characters to keep you interested, either. A variety of friendly, sinister and questionable characters flesh out the world of Divergent, adding layers to the mystery and enhancing the action at every turn.

Another nice touch Roth includes is the fact that Divergent, while the first in a trilogy, is complete in and of itself. She talks about her desire to do this on her blog — and it makes the experience of reading Divergent all the more rewarding. Because you get a complete story, while still knowing there is much more ahead for this world and these characters.

Divergent is in stores now! Plus, tune in all month-long for our book of the month features on Divergent.

One thought on “Divergent by Veronica Roth: Sara’s Review”